Ellis students have been Gigapanning different places of worship. Here you see two students pretty well soaked by the rain at the Hindu Jain Temple in Monroeville, PA.
We were treated to a nice tour, but we were not allowed to photograph inside. However, the outside of the temple is also quite beautiful. 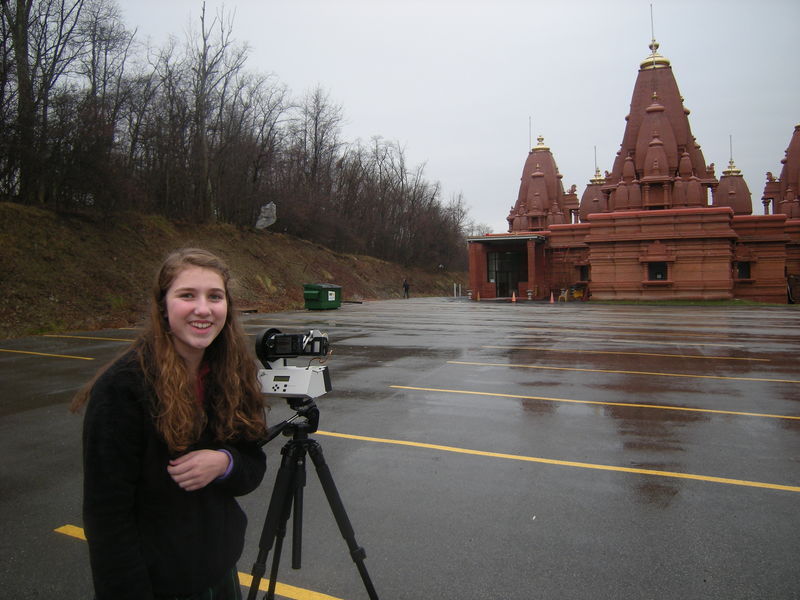 Posted by Karen Kaighin, the instructor of students at the Ellis School.
The students are Valiha (with her coat on her head) and Annie.

Journey To A Notherland is a project that connects students in Pittsburgh, Pennsylvania with students in Nijmegen, Netherlands. We exchange ideas, artwork and creativity with one another. Although the two groups of students live across the world, many of the students come from very similar backgrounds. We talk about community, food, clothing, and music as the main sources of our work. The students in the Pittsburgh group come from various backgrounds: Some are 100% Pittsburgh, and have lived here their entire life. Others have moved from other places. Many of our students come from Africa, with a large population of Somali refugees now living in Pittsburgh. The parallel group of students in Nijmegen consist primarily of Somali refugee  and 1st generation students now living in the Netherlands. To learn more, visit http://journeytoanotherland.wordpress.com/
This is an ongoing project between Nijmegen and Pittsburgh. We have recently received some exciting letters from our pen-pals in the Netherlands. For now, we wish to share some of the activities we have enjoyed together thus far!

The Pittsburgh group decided to take photos outside of Arsenal Middle School, at the beautiful park behind it. We took two trial photos. Unfortunately, I was having trouble setting up the automatic button shooter, so I had to take each photo manually. This meant I could not join our students in jumping into multiple frames of the photo.

This photo, as you can tell is somewhat inside out, but it has a cool effect. It is taken at Arsenal Park, showing our students playing in the Autumn park before Sunset!

This was our Pittsburgh student's first try at the GigaPan. After selecting a scene and setting up the height and width that would be the GigaPan, the students jumped into frames as I tried to direct them. A cool lesson we learned from this activity was that some time accidents help you discover something new, or make something beautiful. In these photos, we are collaged over each other and blending into one another. In the second GigaPan, the finished product has the sky up top and below the ground. What does having the sky above you and below you make you think of? For one, it reminds us of our relation to the sun, and that our friends in the Netherlands are in a different timezone 6 hours ahead, where the sun may have gone down just that much. It also makes us think about the way we are constantly moving, from classroom to classroom, from block to block, or the way we have moved from country to country and are now standing on a new ground. 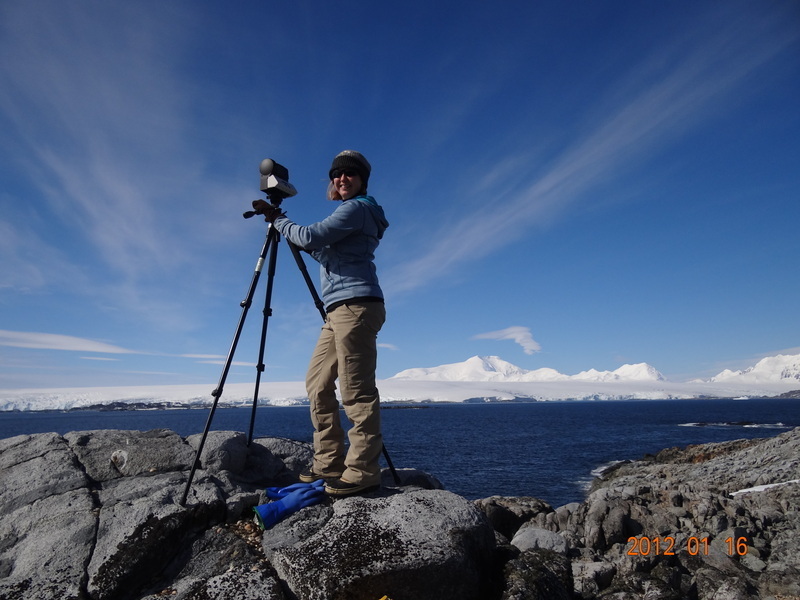 I am a first grade teacher on a scientific research team deployed at Palmer Station, Antarctica.  We are here studying a wingless fly called Belgica antarctica.   It is the southernmost, free-living insect in Antarctica and it's the largest animal that remains on land throughout the year.  As the team's educational outreach coordinator, I used Gigapan technology to connect students in my school district as well as nationally with scientific research taking place at the bottom of the world.  Antarctic Gigapan images can be found on my team's outreach blog at www.crestwoodexplorestheworld.org along with descriptive information and scavenger hunt challenges.  Gigapan gives (preschool-grade 12) students an opportunity to explore detailed images of the Antarctic environment, provoking thoughtful questions and higher levels of learning.

My class and I tried out Gigapan and it was a great experience. Working with the camera was fascinating and I personally enjoyed exploring how a Gigapan imager works. I amproud of my students’ work in taking the picture, which came out very well. It is nice to see how enthusiastic the students are about interacting with others through The Painting on the Wall project.  Gigapan offers an exciting opportunity for students to interact with each other as part of a global community.

"When we went through our city to look for meaningful street art, it really changed the way I looked at Baltimore City. I think it was a wonderful idea, and it enables us to see interesting parts of other peoples home cities"  (Sam)

"I liked working with the gigapan taking pictures of graffiti"

We invite you to participate in the second Nearby Nature GigaBlitz.  We urge you to start thinking about possible subjects close to your home, school or work, and then during the solstice week of December 19 – 25 get out and gigapan local animals and plants in all their biodiversity. We would especially encourage prior entrants to re-visit the settings they recorded during the June 2011 gigablitz. Call for Entries, Nearby Nature GigaBlitz, December 19–25, 2011 In our inaugural GigaBlitz this past June, we expressed our hope that Nearby Nature gigablitzes would “help the GigaPan community more deeply explore, document, and celebrate the diversity of life forms in their local habitats.” You responded with over 70 amazing gigapixel images, and countless snapshots. Our jury looked closely at all of them, wishing each could be held up as shining examples of biodiversity in everyday places. In the end, 8 fascinating entries – each brimming with life – were chosen as best representing the Nearby Nature premise. These are profiled in the November 2011 issue of GigaPan Magazine. Happy GigaPanning!

This is first followup on the time lapse photography done yesterday.

Randy and others (Anne, Josh, and Dror) were shooting from about 6am to midnight yesterday. Randy said that over 60,000 photographs (at 18 megapixels each) were captured; one every four seconds, on each of four cameras, clicking in unison. The cameras captured sunrise, morning commute, midday traffic, the coming & going of clouds over the city, coal barges going up & down the river, evening commute, sunset, moonrise, drivers & ferry boats streaming toward Heinz Field, and the Steelers game! It will be days until all of these images are stitched into a zoomable video, but in the meantime, here are some snapshots. photo album: https://picasaweb.google.com/111415749895648787719/TimeLapseGigapanFromMtWash... 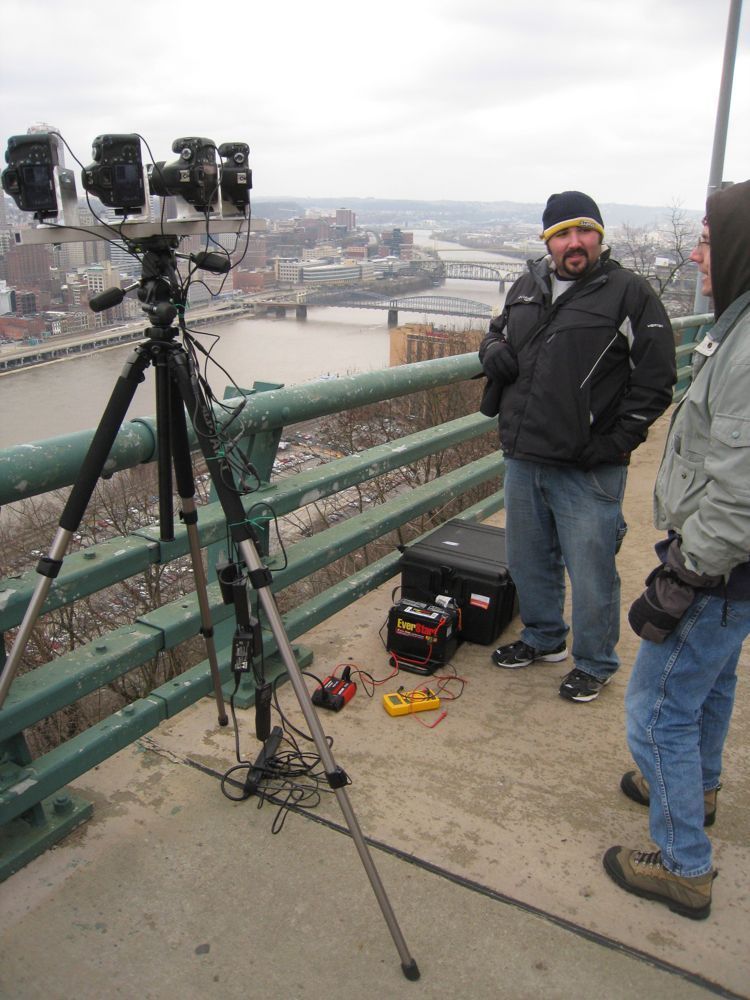 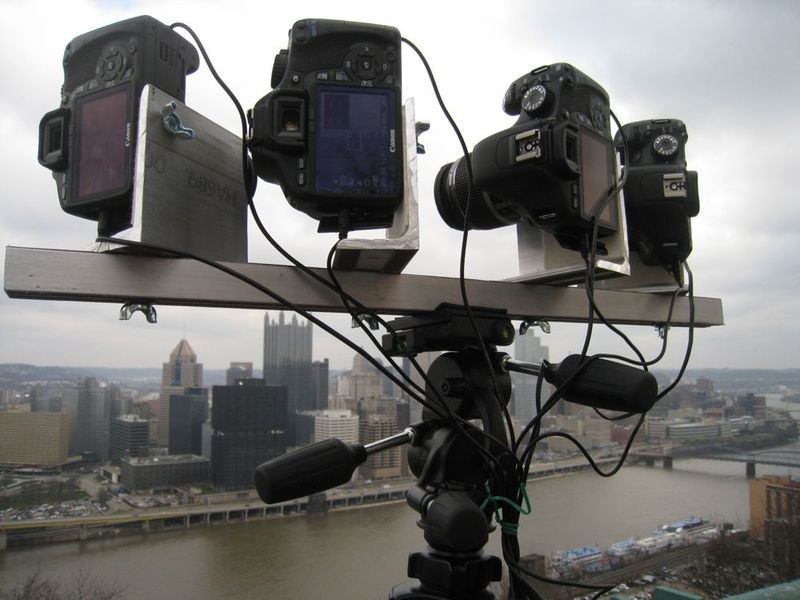 Four Canon T2i's running off a car battery, each camera had a 128 GB memory card. 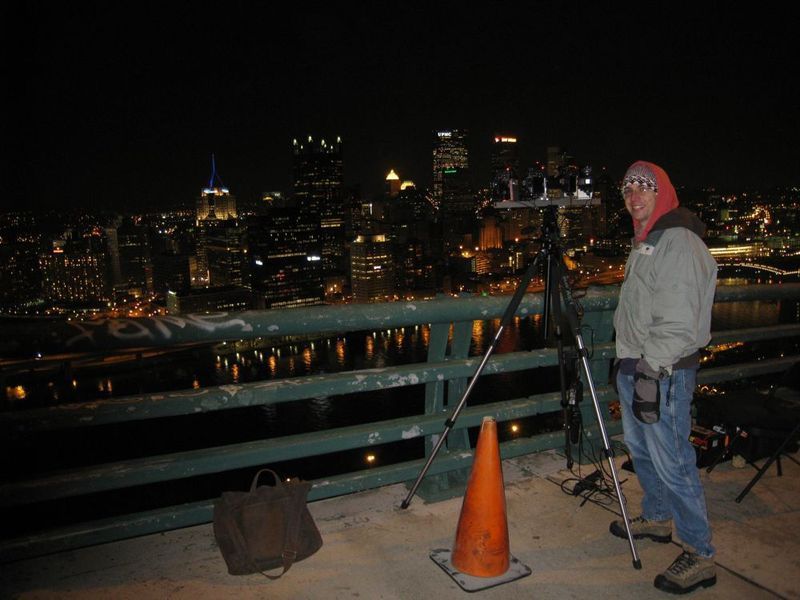 (location is at center of this map)

The panorama will include most of this view (click link)

He plans to be at that location shooting picures every second or two from 5:30am until 11pm!

If you're in the area, you could drop by and say hi. Or if you bike/walk along the Mon Wharf or some other location downtown visible from the top of McArdle Roadway, you'll be in the video! Wear bright colors!

Here's a simple time lapse of the Paddle-at-the-Point event last year, shot with a single camera. Thursday's time lapse will use four cameras shooting in unison.

(I posted this same message to the bike-pgh bboard http://bike-pgh.org/bbpress/topic/appear-in-a-time-lapse-video-of-downtown-on-thu-128#post-90344 to publicize it some). 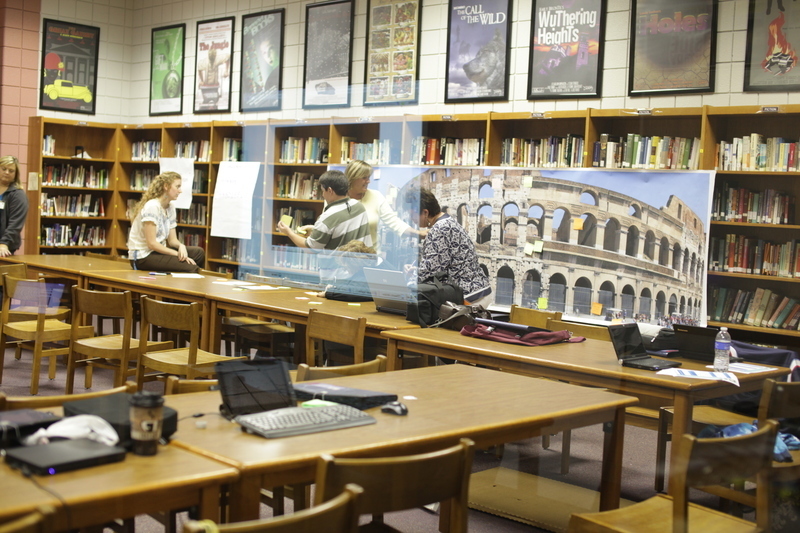 Around 40 teachers from Cabell, Wayne, Nicholas and Randolph counties from year one and two of the grant learned about GigaPan technology and how to integrate it into existing curriculum. Advanced integration strategies for every day use in reading, writing, vocabulary, social studies and science were examined as well.  Teachers left with projects planned and ideas ready to incorporate into their classroom.  We're excited about beginning a new year with GigaPan and looking forward to working with a great group of teachers!
Download GigaTalk.docx
Download Panoramics_and_Precision.pdf
Join us for a Reception and walking tour of “Panoramics & Precision”, a new exhibit of large scale Gigapan prints installed in the School for Computer Science. This afternoon at 4:30pm in the 5200 corridor of GHC. Light refreshments will be served, and the event is open to the public.
The prints have been previously on display at the Carnegie Museum of Natural History.

The press release is available at http://news.cs.cmu.edu/article.php?a=2747

See PDF for location of prints around the building.